We get asked quite often why we market so many different vegan omega-3 products; EPA & DHA, DHA and Vrill. The difference between EPA & DHA and DHA should be obvious. The DHA product contains only DHA and is mainly intended for people who want brain and eye support, such as students or pregnant women. EPA & DHA not only supports the brain and eyes, also optimal heart function and is recommended for everyone from young to old. Just like Vrill, but that offers even more extras.

Vrill is alternative to krill oil

We have marketed Testa Vrill Omega-3 as a vegan substitute for krill oil. It has the same specific properties as krill oil, but without the krill. Many people use krill oil because it is ‘purer’ than fish oil and because it contains phospholipids and astaxanthin. We put purer in inverted commas because, in our view, there is nothing purer about extracting tonnes of krill from the Arctic Ocean and thus unbalancing the ecosystem. But that aside. We have formulated Vrill so that it is also richer than krill oil. In fact, the daily dose* contains twice as much DHA & EPA and phospholipids and up to five times more astaxanthin than the average krill oil.

EPA & DHA support proper heart and brain function. With the addition of phospholipids and astaxanthin, it also helps you age more healthily. In fact, phospholipids are one of the most important building blocks of the cell membrane. They ensure the repair of damaged cell structures, slowing down degeneration. Moreover, they stimulate the normal passage of signals along nerve fibres to the brain and back. Astaxanthin** is a strong antioxidant made by algae to resist the harmful effects of sunlight and oxygen. Claims on astaxanthin may not be made, but studies that have been done show that this strong antioxidant plays a role everywhere in the body. It helps counteract ageing processes caused by oxidative damage. It also supports better recovery of tired eyes and stimulates the immune system. Astaxanthin also provides extra protection against free radicals that break down skin collagen and cause lines and wrinkles.

In short, are you heading towards senior age, then it is a good idea to choose Vrill as an addition to a healthy diet.

*Testa Vrill contains 280 mg DHA and 150 mg EPA per daily dose (2 capsules) and is enriched with natural phospholipids and astaxanthin, a strong antioxidant. 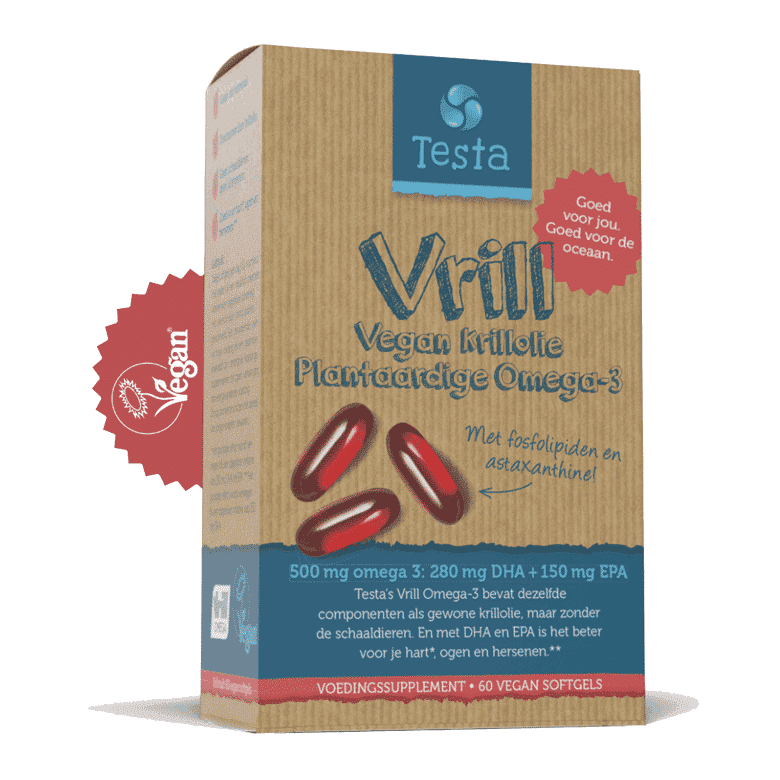